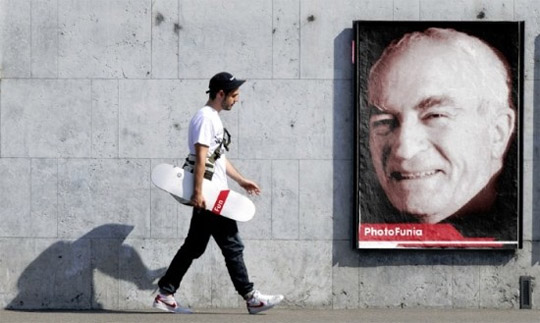 Vignelli was born in Milan in 1931. As a teenager, he became enthralled with design and befriended many of the great architects of his day. (He sometimes says his youth was spent as an “architecture groupie.”) He went on to study architecture at the Politecnico di Milano and later at the Università di Architettura, Venice.

From 1957 to 1960, Vignelli visited America on a fellowship, and returned to New York in 1966 to start the New York branch of a new company, Unimark International, which quickly became, in scope and personnel, one of the largest design firms in the world. The firm went on to design many of the world’s most recognizable corporate identities, including that of American Airlines (which forced him to incorporate the eagle, Massimo is always quick to point out).

Vignelli designed the iconic signage for the New York City Subway system during this period. Contrary to news reports and lore, Vignelli did not design the DC Metro Map. It was designed by Lance Wyman. Vignelli designed the simple signage and wayfinding system for the DC Metro and was the one to suggest that it be named “Metro” like many other capital city subways. Its original name was a mishmash of various states and transportation groups.

In 1971, Massimo founded Vignelli Associates with his wife, Lella. He and his wife continue to work from their New York office.

Vignelli was involved with filmmaker Gary Hustwit in the documentary Helvetica, about the typeface of the same name. Vignelli also recently updated his 1972 New York City subway map.

Warning: count(): Parameter must be an array or an object that implements Countable in /home/acrhive/domains/wpshower.com/public_html/synch/wp-includes/class-wp-comment-query.php on line 399