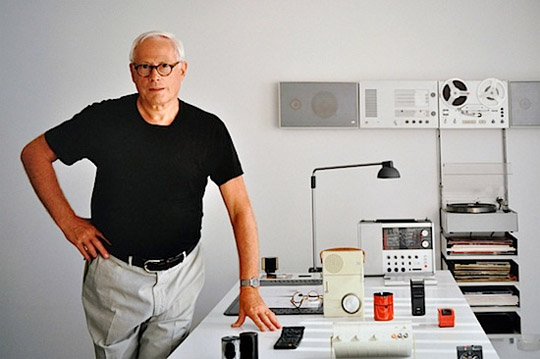 Rams studied architecture at the Werkkunstschule Wiesbaden as well as learning carpentry from 1943 to 1957. After working for the architect Otto Apel between 1953 and 1955 he joined the electronic devices manufacturer Braun where he became chief of design in 1961, a position he kept until 1995.

Rams once explained his design approach in the phrase “Weniger, aber besser” which freely translates as “Less, but better”. Rams and his staff designed many memorable products for Braun including the famous SK-4 record player and the high-quality ‘D’-series (D45, D46) of 35 mm film slide projectors. He is also known for designing the 606 Universal Shelving System by Vitsœ in 1960.

Many of his designs — coffee makers, calculators, radios, audio/visual equipment, consumer appliances and office products — have found a permanent home at many museums over the world, including MoMA in New York. For nearly 30 years Dieter Rams served as head of design for Braun A.G. until his retirement in 1998. He continues to be highly regarded in design circles and currently has a major retrospective of his work on tour around the world.

In 2010, to mark his contribution to the world of design, he was awarded the ‘Kölner Klopfer’ prize by the students of the Cologne International School of Design.